skip to main content
Find out how you can support our vital work
Home / Archive / 2015 / Yes Equality: The Campaign for Civil Marriage Equality Formally Launches 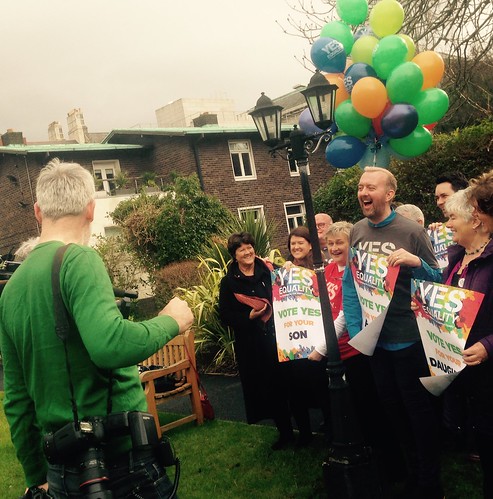 Yes Equality: The Campaign for Civil Marriage Equality, a new independent nationwide civil society group was launched yesterday 9 March 2015 at the Rotunda Pillar Room. The group has been formed to coordinate and lead the campaign to win the Marriage Equality Referendum on May 22nd.

Hosted by Charlie Bird, the launch was attended by numerous well known leaders from civil society, and a large representation from social justice organisations, civil society groups, political and faith-based groups, from across Ireland.

The Yes Equality campaign was established by GLEN, Marriage Equality and the ICCL, which have been working for equality for LGBT people for many years. The three organisations have been working together since successfully encouraging the Convention on the Constitution to propose a marriage equality referendum.

The Yes Equality campaign has volunteers and supporters all across the country who have organised into local Yes Equality groups to coordinate the campaign at grassroots level.

Yes Equality is also supported by a wide range of civil society organisations such as trades unions, women’s groups, all political parties, and youth and student organisations. A range of faith based and professional groups including teachers, doctors, psychologists, academics and lawyers, and a diverse range of individuals from all across Irish society – from all age groups. backgrounds, political traditions and religions, are all campaigning hard for a Yes vote.

The campaign has offices in Clarendon Street, Dublin 2 and is registered as company limited by guarantee. LGBT Equality Ltd/Yes Equality is registered as a Third Party with the Standards in Public Office Commission in accordance with the Electoral Acts. All funds raised are compliant with SIPOC Third Party rules.

Stop the Card and Delete Our Data!!

The Data Protection Commissioner has said the government has no legal right to insist on the card for services outside of welfare.
If you have a card, your personal information could be used unlawfully and stored in a way that makes it vulnerable to theft.

and help us fight this!