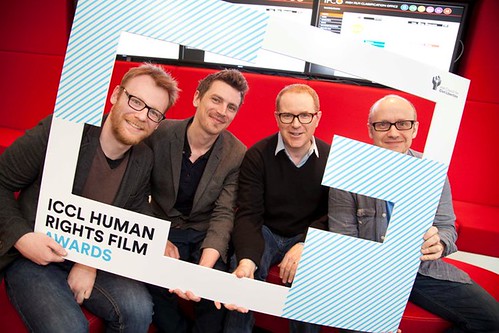 The cream of international entries to Ireland’s only human rights-themed short film competition was announced at a photocall today in Dublin’s Smithfield by Awards Jury members, including Frank director Lenny Abrahamson, playwright and screenwriter Conor McPherson (I Went Down, The Actors, The Eclipse) and Love/Hate’s Brian Gleeson.

The shortlist consists of six hard-hitting documentaries that combine filmmaking with international human rights activism. Issues explored include homelessness, the arts and their impact on health, immigration, holocaust survivors, the land/food crisis in Guatamala and the plight of Syrian refugees.

The films are now available to view on the Awards website HERE. The ICCL will host a star-studded Gala screening of the six shortlisted films on 26 June 2014 in Dublin’s Light House Cinema.

To arrange print and broadcast interviews with the Jury and filmmakers and for further information on the awards screening in the Light House Cinema on 26th June 2014, please contact:

Notes to the editor:

Shot by filmmaker Alan Whelan, Food Not Fuel is an educational and moving short documentary on the struggles of indigenous Mayans in Guatamala, who have faced eviction and expropriation to make way for bio fuel crops. Actor Aidan Gillen meets with members of the Rio Frio community in Guatemala’s Polochic valley region, who speak emotionally about their struggle to survive and about their relationship with the land, which is central to their lives and identity. The film explores the aftermath of the seizure and exploitation of sacred ancestral Mayan lands from local people – lands now used to cultivate sugar cane to satisfy European bio fuel demands.

Directed by Spanish filmmaker Nacho Gil, A Thin Line is a poignant short film that examines the issue of homelessness. Set to an evocative soundtrack, the film introduces people who, for various reasons, have found themselves homeless on the streets of Valencia. The film’s focus on first-hand testimony gives it a profound human dimension, articulately demonstrating the speakers’ impulse not just to survive, but to preserve their human dignity. Through their accounts, we learn that it is only a very thin line that separates all of us from marginalisation and social exclusion.

Director: Róisín LougheryThe Room subtly explores the small moments of magic that happen in the course of an art class in the Sacred Heart Hospital in Castlebar, Co. Mayo. Using a ‘fly on the wall’ approach, the film is a powerful and touching portrayal of the creative experience of long stay hospital residents who have an acquired brain injury as a result of stroke, accident or conditions such as Alzheimer’s. Told through artist Tom Meskell’s own words, the film reveals the profound impact of art and creativity in the lives of the residents.

Chaja and Mimi is a charming short film that tells the story of Chaja Florentin and Mimi Frons who have been best friends for 83 years having met in kindergarten. Born and raised in Berlin, they had to escape to Palestine with their families in 1934. Chaja and Mimi chat engagingly about their complicated relationship with Germany and with Israel in a Tel Aviv café where they meet every day. By sharing photographs of pre-war Berlin, filmmaker Eric Esser elicits from these two remarkable women a fascinating insight into their attitudes to Germany, to the past, and to forgiveness. This is a tender inspirational story about survival, homeland, identity and the powerful bond of friendship.

Modou Modou is a Senegalese word for migrant people of sub-Saharan origin, who reside in Europe. Directed by Spanish filmmaker Virginia Manchado, this insightful short film follows a day in the life of an African emigrant who lives and works in London as a market labourer. Jazeem is from Senegal and works tirelessly every day to improve the life of his family back home, a family he hasn’t seen in two years. The documentary starkly shows the reality of life for Jazeem as he struggles with loneliness, exhaustion and the disappointment of London life.

Harmanli: Trapped on the Fringe of Freedom

Harmanli: Trapped on the Fringe of Freedom sees Irish documentary maker Niamh Heery explore life for asylum seekers inside the Harmanli camp in south-eastern Bulgaria. The camp houses over one thousand people many of whom claim to be Syrians fleeing conflict in their home country and seeking refugee status in Europe. Harmanli was established in a disused military base in order to cope with the high numbers of asylum seekers crossing into Bulgaria from Turkey, and accommodates women, men and children.